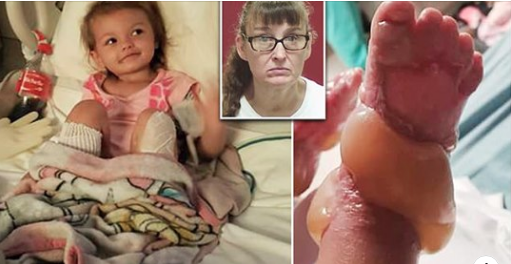 Horrific pictures show a Tennessee toddler’s feet covered in burns and blisters after they were dipped into boiling water by a relative.

The abhorrent incident occurred on August 11 when two-year-old Kaylee Robinson was being babysat by her step-grandmother, Jennifer Vaughn, at her home in Chattanooga.

The toddler’s mother, Brittany Smith, told ABC 2 that Vaughn admitted to using the scalding water on the tot because she was ‘having a bad day’.

Vaughn has now been charged with aggravated child abuse and is being held on a $150,000 bond.

Meanwhile, Smith has shared pictures of her little girl’s feet with several media outlets – the same images that have been looked at by authorities who are now assigned to the case.

Rhea County Sheriff’s Department detective Rocky Potter – who has examined the photographs – said  that they feature ‘the worst scald burns I’ve ever seen’.

According to Detective Potter, the hospital where little Kaylee is being treated describe the injuries as ‘sock burns’, because they look as if she is wearing a pink pair of socks.

‘It’s terrible, it’s just so stressful. Kaylee has had two operations so far, but they haven’t worked. The skin is not really repairing itself in the way the doctors hoped it would. She’s in a lot of pain,’ the anguished mom told the publication.

‘They [surgeons] are going to take some skin from her thigh next week to try and repair her feet,’ she added.

Smith also revealed that Kaylee ‘is at high risk of infection and could end up losing her feet’.

Photos show the tot with third-degree burns at the top of her feet and large welting blisters wrapping around her ankles.

A GoFundMe has been set up to help with Kaylee’s medical costs.