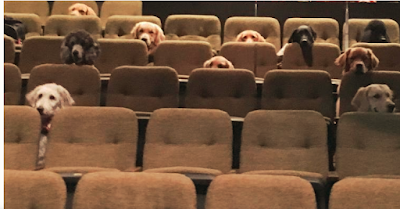 When the cast of a Canadian production of “Billy Elliot: The Musical” took their final bow after a recent show, the audience didn’t make a single sound — not even a woof.
A polite crowd of about a dozen future service dogs attended an August performance at Ontario’s Stratford Festival as part of their training. While a silent curtain call might disappoint actors, the dogs’ spellbound stillness is a great sign for their future handlers.
The event was part of a two-year training program by K-9 Country Inn Working Service Dogs, head trainer Laura MacKenzie said.

The future service dogs have toured zoos, subways and crowded fairs to acclimate them to the unfamiliar lights and sounds, rapid movements and bustling crowds they might encounter with their handler, she said.
At the theater, the dogs are expected to sit under the seat or curl up at their handlers’ feet while their humans enjoy the show, she said.

Students in South Africa beat up teacher because she seized the phone of one of the students!
1 min read

Students in South Africa beat up teacher because she seized the phone of one of the students!