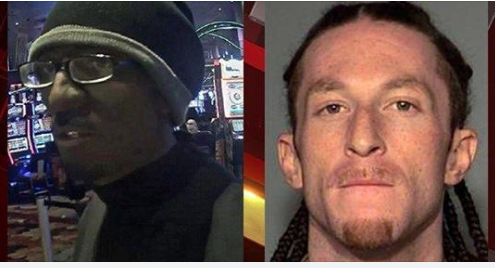 LAS VEGAS (FOX5) – A man who disguised himself in blackface pleaded guilty to armed robbery of the casino floor cashier cage at New York-New York Hotel and Casino, according to the U.S. Attorney’s office.

Cameron James Kennedy, 27, of Las Vegas, pleaded guilty before to one count of interference with commerce by robbery. He faces the maximum penalty of 20 years in prison and a $250,000 fine, at his Dec. 13, 2018.

Kennedy was arrested two weeks after the Jan. 10 robbery in an effort by Las Vegas Metro police, the FBI and the United States Attorney’s Office.

The investigation showed that Kennedy, originally described by police as a black man, had used face paint or concealing makeup to disguise his appearance. Kennedy was later identified “in part because of his unique gold mouth grill, which is a type of jewelry worn over a person’s teeth.”

According to U.S. Attorney Dayle Elieson and a criminal complaint, Kennedy was under federal supervision for a bank robbery and was required to wear a GPS device. Kennedy cut off the bracelet three hours before the casino robbery.

During the robbery, Kennedy lifted his jacket to display a black semiautomatic handgun in his waistband, the complaint said. He told the cashier, “I want all your hundreds and don’t mess around. I am not kidding, I want all the hundreds.” Kennedy fled in a cab with about $23,367, the U.S. Attorney’s office said.

After the robbery, Kennedy contacted a jeweler and placed an order for a $1,500 gold bracelet but had not picked it up. He reportedly spent money on marijuana, food, hotel room stays and pre-paid debit card deposits.

Kennedy had a prior conviction for two bank robberies he committed in 2012. He served a 63-month sentence. “During those robberies, he threatened to kill a bank teller and displayed a BB gun painted to look like an actual gun.”