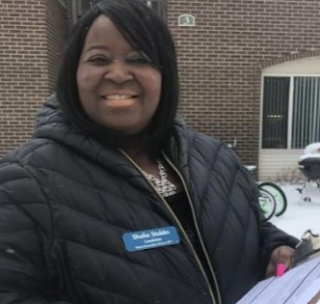 American politician, Sheila Stubbs says she’s knocked on thousands of doors in Madison, Wisconsin, in her 12 years as a county supervisor and has never had a problem in the community, but last month, someone called the police while she was campaigning for a seat in the Wisconsin State Assembly because they thought she was a drug dealer.

Stubbs is the only African-American on the 37-member Dane County Board of Supervisors. What happened to her is just the latest in a string of highly publicized incidents in the US in which police were called on black people for innocuous activities such as napping, barbecuing or meeting over coffee.

The incident happened last month, lthough Stubbs is just talking about it publicily now. It occurred when she was visiting voters in a predominately white neighborhood on the west side of the city. She was wearing a name tag, carrying campaign literature with her picture on it and had a “walk list” with the names and addresses of potential supporters.

Her mother was following behind in their car, along with Stubbs’ 8-year-old daughter. “I had knocked at approximately six doors and some of the future constituents were home, and those that were home, I talked to for about 10 minutes because they were excited that I stopped by,” she said.

Stubbs had been on the street for about 20 minutes and was talking to a resident when a police officer arrived. “I happened to look over and I see this police officer had pulled up behind my car,” Stubbs said.

Stubbs introduced herself to the officer, who told her police had gotten a call from someone who thought Stubbs was a drug dealer. “And I’m like, ‘a drug dealer! Are you serious, they think I’m a drug dealer? No!” she said. Stubbs says she showed the officer her name tag and campaign fliers, but she didn’t seem satisfied until Stubbs showed her the walk list with the addresses of the houses she had visited.

“When I showed it to her. She was like, ‘Oh my gosh, I’m really sorry. I’m really sorry this happened to you,'”Stubbs said. A Madison Police spokesman said the department has a good relationship with Stubbs and referred to the police report of the incident, which aligns with Stubbs’ account.

The report says the officer got a complaint about a suspicious vehicle in front of a “drug house” in the neighborhood. It says that once she found out what was happening, the officer thanked Stubbs’ mother “and apologized for having had to interrupt her evening because of this call to service.”

Stubbs says several people came to check on her during the encounter, including one who asked for a campaign yard sign when she found out what a neighbor had done. The officer encouraged her to keep campaigning, but Stubbs just wanted to leave. “It was just the humiliation. I felt so degraded, but I had to keep a certain persona. And I just wanted to go” she said.